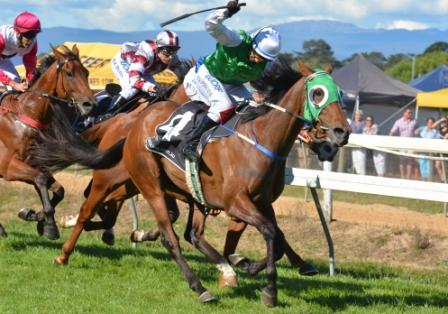 AFTER six years of providing the runner-up in the time honored Longford Cup, Seven Mile Beach trainer Scot Brunton finally tasted success courtesy of his talented mare Cherry Dancer emerging triumphant in the 2015 edition of the race over 1800 metres.

The speed was set by Crystal Reef that showed his usual early speed but he was collared on the home turn by Keukenhof that was being hailed the winner at the top of the home straight.

But when Pires called on Cherry Dancer for the supreme effort she dug deep and claimed the lead within the shadows of the post.

The six-year-old mare has been a great investment for her owners as she has won five races since arriving in Tasmania.

Brunton was thrilled with the win and was quite emotional after the race as he explained one of the mare’s owners, Barry McDonald, has been diagnosed with an illness and that the win had been a tonic for him.

Listen to what trainer Scott Brunton and part-owner Barry McDonald had to say about Cherry Dancer’s Longford Cup win.