Chiko Roll back on the menu 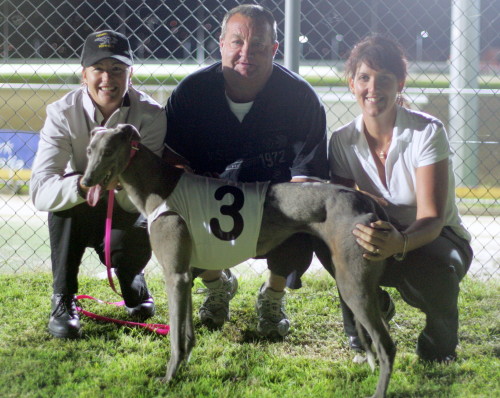 ABOUT a year ago Chiko Roll was being touted as potentially the best greyhound Susan Gittus had ever trained.

Chiko Roll had been placed on debut at Devonport and at her subsequent outing she strolled in at the same track to signal her arrival as a potential star.

But when Gittus took the classy little blue bitch to Launceston for a trial in March last year the outcome was devastating.

Chiko Roll broke her hock when she hit the first turn and the diagnosis was so bad that at one stage connections thought she may have to be put down.

“She broke her hock in three places and one interstate vet said after seeing the X-rays that her chances of ever racing again were about 20 per cent,” Gittus said.

After consultation with the bitch’s Victorian owner Leanne Unsworth, a second opinion was sought and that led to top Hobart veterinarian Andrew Nicholson performing a three-hour operation at the Montrose Veterinary Clinic.

“The three breaks were reasonably clean but there also was a piece of bone that had popped out of the hock so they had to put in extra screws,” she said.

“After the operation they said she probably had a 70 per cent chance of racing again so that was a much better prognosis,” she said.

The recovery process was expected to be long and drawn out and that was certainly the case, according to Gittus.

“We just took it little steps at a time but I must admit to being nervous when it came time to trial,” she said.

Chiko Roll (Big Daddy Cool-Blaine Blues) was taken to Devonport for a stewards’ trial but she wasn’t cleared when her time (26.66) didn’t meet the required qualifying standard.

But a week later she trialled solo and zoomed around in 25.91 to easily meet the requirement.

“In her first stewards trial she went around with her kennel mate Sexylicious but they had a bump at the home turn and that’s what caused her to miss the time.”

“But she trialled solo the next week and everything went well.”

In Hobart last night Chiko Roll made her return to racing and did it in style.

The courageous little blue bitch began well from box three to share the lead to the top turn before bursting clear.

She chased hard and had enough in reserve to stave off a determined challenge from the favourite Winklee Wonder to defeat that dog by over a length.

She stopped the clock in 26.47 which was an outstanding result given she’d been off the scene for so long.

Gittus was filled with emotion and at one stage had to walk from the throng to gain her composure.

“I had to walk away otherwise I would have burst into tears,” Gittus said.

“When you nurse a dog back from any injury and they race again it is an emotional journey but this one in particular has been special.”

“We were hoping she could win a few races and the way she ran tonight I’d say she’ll do that without much effort,” she said.

Chiko Roll is likely to have her next start in a grade five at Devonport next Tuesday week.