Ciskei win no surprise to trainer 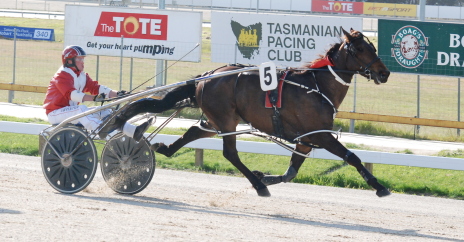 WELL BRED three-year-old pacer Ciskei made an early winning start to his racing career when he powered home to win the Master Barry Pace (3C0-3C1) over 2090 metres at Tattersall’s Park in Hobart on Sunday night.

Having only his second start, Ciskei (Gareth Rattray) defied a tough task of facing the breeze to score a runaway win over Birdie’s Best and the well-backed favourite Metro Master with race leader Ursula Kelly fading to finish fourth.

Ciskei (Bettors Delight-Simsallabim) began well from gate five but after having a dip for the lead driver Gareth Rattray took hold and allowed his charge to sit at the leader’s wheel.

When Rattray called on the colt to give in the home straight he sped clear and answered a late challenge from the minor placegetters.

Ciskei is prepared at Longford by multiple premiership-winning trainer Barrie Rattray who was delighted with the win.

“That was a good win and not at all unexpected,” Rattray said.

The colt is well related, being a half-brother to Perfect Portrait and his mother is a half-sister to former Group 1 Tasmanian Championship winner Prodigious.

Listen to what trainer Barrie Rattray had to say about Ciskei’s first win – click here.