Clark gets three into Gift final 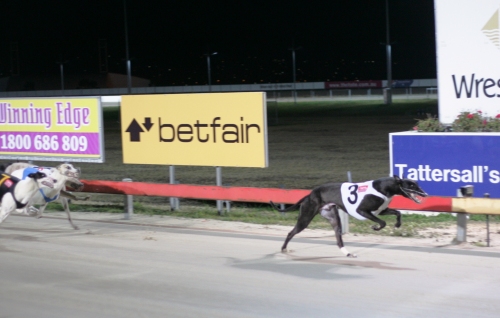 PROMINENT North-WestCoast owner-trainer Alan Clark has secured three runners in this week’s Minister’s Gift final to be run at Tattersall’s Park in Hobart.

But none of them are trained by the astute mentor.

Posh Larry (Path To Power-Ebony Espirit) is prepared by Larry Tanner at East Devonport and he made his way into the final by scoring maximum points in the first round of heats in Launceston and he was a game second to Daegan in their heat at Devonport last Tuesday week.

Posh Luke scraped into the final by winning his heat at Devonport.

The heat he contested in Launceston was abandoned when a fallen runner ran back into the field, so each runner in that heat was awarded 4.4 points.

Posh Luke made the most of his box one draw at Devonport to lead at the top turn and then had enough in reserve to hold out Hunter and Samurai Kid in the run to the line.

Posh Gem (Bombastic Shiraz-Posh Zoya) made his way into the final with a gallant second in both heats.

The final field was determined on a point-score basis with 11 points allocated for a heat win, eight for second, six for third and four for fourth and diminishing by one through to seventh.

While Clark has three live hopes, the Eileen Thomas-trained Daegan is bound to start favourite.

The litter brother of star dog Damek has won his past four and has delivered those results because of his box manners that have gone from average to impeccable in recent times.

He demolished his rivals in both Minister’s Gift heats and his times suggest he is getting stronger with racing.

The Butch Deverell-trained Ella Lucy also won both her heats and she will be very competitive in the final if she begins well.

Stylish Moon also was a graduate from the abandoned Launceston heat and he clinched his final berth by winning his Devonport heat, coming from well back on the home turn to score impressively.

Callamac Blaze has returned to form and must be regarded as a definite chance to win the final.

He scored an impressive win at Devonport to clinch his berth and a repeat effort would see him figure prominently at the business end of proceedings in the final.

Samurai Kid, prepared by Jillian Stamford, is another that has to begin well to win.

He won his heat in Launceston and then battled away for third in his Devonport heat to earn enough points to make the final.

The connections of the winner of the final will pocket $10,000.