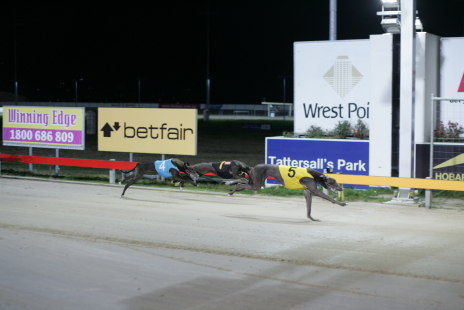 Sour Pop from the in form kennel of Moorleah trainer Russell Watts and Place Your Bet for Glenorchy’s Ted Devine should fight out the finish of the Young Star Classic Final at Elwick tonight.

Sour Pop has won his last four starts at Hobart and his effort last week to pick up the leaders Domenic’s Joanne and Our Silhouette was first class and the long straight certainly suits his racing style.

Place Your Bet started a long odds on favourite last week when second to Rob Pines and on the face of it was a tad disappointing.

However Devine was rather upbeat after the run believing the son of Big Daddy Cool had been a run short after a month off and should improve sharply this week even though jumping from five. Rob Pines and Educated Cash should be included in the multiples.

Sandbanker (R7) should continue on his winning way.

This son of Collision has won his last two here in fast times and should enjoy jumping from the pink. Buckle Up Doug and Harrison George look next best.

Loringo (R9) for Mangalore trainer Mick Stringer should be hard to beat.

This son of Premier Fantasy has only had the three starts in Tasmania for two wins and a second to Awesome Naz in fast time at Devonport.

Lucky Norris will be hard to hold out while Pretty Pearl is firing as well.