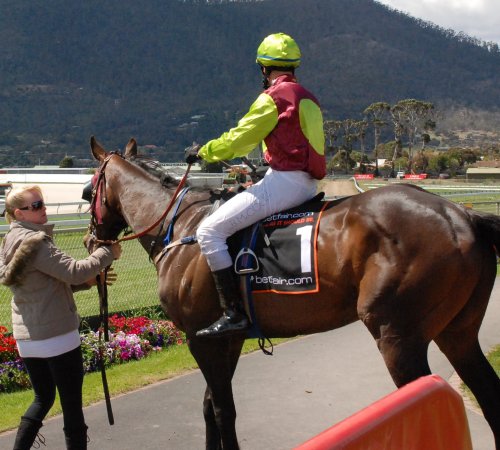 TALENTED trainer Jason Clifford has earned a reputation as a master horseman and in Hobart last Sunday his prowess was showcased by the courageous first-up win of Terra Run in the Stonemason Wines 0-75 Handicap over 1600 metres.

The seven-year-old gelding was having his first start since finishing last in an open handicap at Devonport in November last year.

Preparing a middle distance performer for a first-up tilt over 1600 metres is not an orthodox procedure but Clifford has never been one to stick to the book.

Zellarcy (Stephen Maskiell) led and had his rivals struggling on the home turn but as that horse drifted up the track over the last 200 metres and started to feel his legs, Terra Run kept grinding home with apprentice Ronan Keogh urging him along with only the occasional flick of the persuader.

Clifford and his partner Tania Oxley-Graham have only recently taken over ownership of Terra Run, so the trainer’s endeavor and conviction were rewarded with a decent earn.

“I have been a firm believer for some time that you should be able to get a strong middle distance horse to win first-up over a mile (1600m), provided you can get the right conditions and that’s what I believed I could do with this horse,” Clifford said.

“We had the horse really fit and ready to run and we had track conditions that suited him.”

“When Zellarcy was so far in front I thought we’d have to settle for a place but my horse just kept grinding away in the straight and got up in the last stride,” he said.

Clifford watched the race on a monitor in the Media Room and when he could see that Terra Run was in with a winning chance 100 metres out he became quite animated and emotional, punching the air and letting loose an almighty scream of joy when his gallant gelding poked his nose in front right on the line.

“I was emotional but that was because something I believed in was realised and that a few people had said it was a mistake to think the horse could win first-up over that distance.”

“I know there are certain elements of training that have to be adhered to but you also have to believe in yourself and step outside the circle sometimes to get a result.”

“I know the preparation I gave Terra Run wouldn’t work with some other horses with similar ability, so I guess at the end of the day it all comes down to knowing the horses you train,” he said.

Ardent fans of the Clifford stable were rewarded well because Terra Run paid $24 on the TOTE.