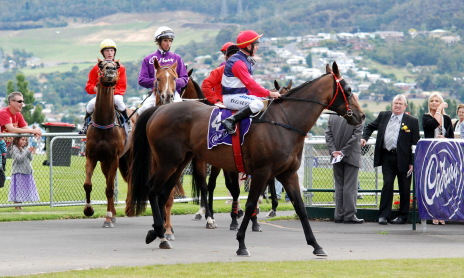 A TASMANIAN owned and trained horse has not won the AAMI Hobart Cup since trainer Jason Clifford saddled up Our Dashing Dane to win the race in 2005.

At Tattersall’s Park yesterday Clifford saddled up seven-year-old Forbidden Quest to win the weight-for-age Ingham Jockey Club Cup over 2100 metres to signal his arrival as a genuine contender in next Sunday’s AAMI Hobart Cup.

Forbidden Quest ($17) upset the odds-on favourite Dream Pedlar ($1.70) to secure a berth in next Sunday’s AAMI Hobart Cup as the winner of the race gained ballot-free entry into the Group 3 event that carries prizemoney of $300,000.

The gelding was ridden by Darren Gauci who earned every bit of his riding fee given Forbidden Quest pulled hard for much of the race.

Gauci had the seven-year-old settled third but when he started to tug and reef it took every ounce of Gauci’s strength to keep the horse restrained.

Borugino set a solid clip with Zellarcy hot on his heels while Forbidden Quest was third to the 600-mertre peg with Dream Pedlar three-wide and tugging at the bit.

Forbidden Quest hit the front at the top of the straight and despite having pulled hard in the run he forged clear and safely held Dream pedlar over the concluding stages with Testasaurus third.

Gauci summed up the effort when he said: “I’m more exhausted than the horse.”

“He pulled hard but he’s very tough,” he said.

Clifford confirmed Gauci had accepted the ride in the AAMI Hobart Cup.