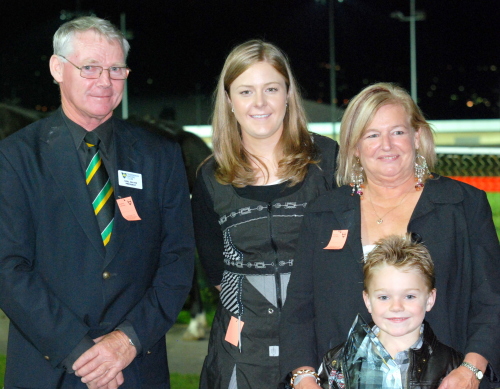 Having only her third start, Cloudy Delight (Bettors Delight-Cloudy Road) sat outside of her stablemate Iden Princess for the last lap but defied the tough run to go on and score by almost three metres from Romantic Moment with Champagne Robbie over three metres astern.

It was an outstanding performance form a filly having only her third start and a performance that delighted her part owner-breeder Noel Salter.

“To sit in the breeze and do what she did tonight I think is testament to her ability,” Salter said.

Cloudy Delight’s dam Cloudy Road won five and placed 14 times from 67 starts and this is her third foal with the other two unable to win from 27 starts between them.

Cloudy Delight is trained by Christian Salter and she was driven by Gareth Rattray who said the filly was strong on the line.

“This filly gives me the impression she might develop into a good stayer,” Rattray said.

Salter was delighted with the result even though he drove the race leader Iden Princess.

“Cloudy Delight is a very nice filly and while she was relatively inexperienced in that field she has a bit of maturity about her that probably sets her apart from many of the fillies that contested the race,” the trainer said.

Listen to what owner-breeder Noel Salter had to say about Cloudy Delight’s win – click here.