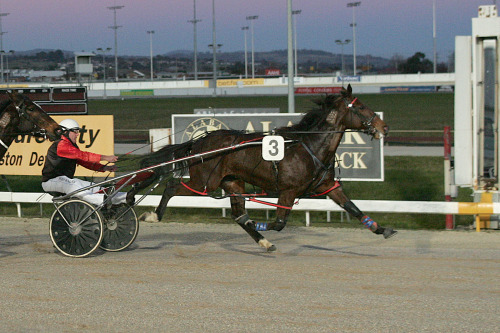 By Greg Mansfield, The Examiner

Wayne Rattray regards ill-fated Cody Maverick as “nearly the best” horse he has prepared during his illustrious career.

So, the win by Cody Maverick’s three-quarter sister Codie Karalta in the Mitavite 2YO at Mowbray on Sunday night was special for the veteran trainer.

“And, this filly has plenty of ability too but she’s been a bit of a heart-breaker”.

“She’s had a neck problem and we’ve had difficulty getting her to run around the corners”.

“But we’re slowly getting there. She was a bit scratchy on the first turn again tonight but she travelled good from then on. We’ll keep working on her”.

Meanwhile, promising three-year-old Thirsty Mach made it two wins in a row when he led all the win in the Tazwaste Recycling Pace.

However trainer-driver Rohan Hillier still does not consider the gelding to be racing anywhere near his best.

“He’s got a little problem in a joint in his offside foreleg and he’s not going as good as he can,” Hillier said.

“He’s quite sound at home when we’re working him but he does feel it in his races when the pressure comes on”.

“He’s looking for the paddock but we will try to win another three-year-old race with him before we put him out for a good spell”.

Thirsty Mach was untroubled to lead from the pole and comfortably held out a gallant Prisonbreak, with Inchbyinch making good ground to finish third.