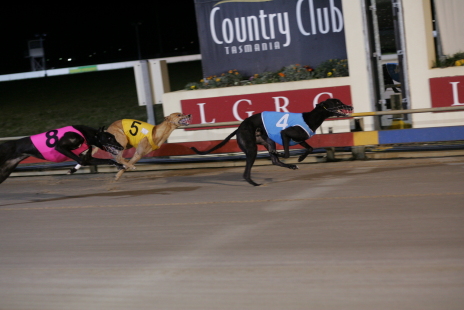 Collyn Rocket for Managlore trainer Ted Medhurst has won two in a week, last Thursday night over the 461m at Hobart and at the Tote Racing Centre Launceston he showed his sprinting ability by scoring well over the 278m scamper.

Owned by Tom Astbury in NSW, this son of Collision has now had six starts in Tasmania for Medhurst recording three wins and three third placings.

Collyn Rocket starting at the lucrative odds of $5.10 chased Magwitch (5.01) to the first split, soon after hitting the lead and holdiing off the fast finishing Lepatata by 1 1/2 who nailed Magwich on the line by a 1/2 Head.

Collyn Rocket will have his next start tomorrow night in Race 8 and should be hard to beat again.

Posh Will for Burnie trainer Sandra Elphinstone finally won a feature race over 720m after two second placings, a no race and a power blackout and thoroughly deserved his victory.

This son of Collide has been a handy acquisition to the Elphinstone kennel, taking his tally to 5 wins and 17 placings from his 37 starts.

Chasing Winklee Warrior through the first two splits (5.25, 16.50), he took over through the third recording 30.18 and went on to defeat $1.30 favourite Thirteen Black by 2 1/4 lengths with Leica Taipan running his usual honest race for third a further 1/2 length away.

With the 710m boxes at Hobart almost ready to trial from, Elphinstone will have the opportunity to win more long distance races over the coming months.

The first race over that distance is scheduled to be a FFA on September 1st.