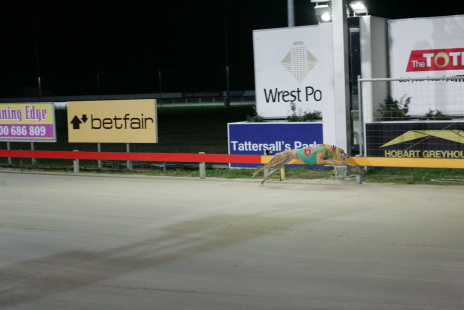 The Final of the Greg Fahey Mid Distance Championship (R7) looks on paper to be a punter’s nightmare with many chances.

Collyn Tiger, $11 in prepost could be the value bet.

This Invitation class sprinter will be better for last week’s run, has the polish of Ted Medhurst and jumps from the coveted one alley.

Back Page Lead quoted an early favourite after last week’s win over Silent Giggle jumps from five and that could place him in an awkward position at box rise.

Silent Giggle chased valiantly last week and although beaten by five lengths there is nothing between both of them on times. Pippi’s Gold is a strong customer and if he gets clear down the back he has the motor to win.

Throw in Intense Suspense with fingers crossed he can find a way through on the rail and it is a high class Final with plenty of multiple options for the double and treble.

Surf Osti (R2) owned by Michael Sutcliffe and trained by Mark Sutcliffe at Acton looks a great each way chance to break through for his first win.

This son of Surf Lorian has had fourteen starts for seven placings and last Monday night’s second behind Daisy Dasher over 600m was solid.

Pat Pines will almost certainly start favourite and by all reports should be very hard to beat while Winklee Storm has run the occasional good race and may fill a placing.