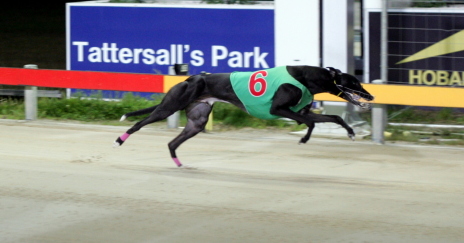 TALENTED Victorian dog Compacto extended his winning streak in Tasmania with an effortless win in a heat of the Betfair Gold Cup over 461 metres at Tattersall’s Park in Hobart last Thursday night.

Compacto, prepared at Sale by Judy Risk, paid his way to Tassie by winning an invitation at Devonport on Melbourne Cup day and a week later he proved that no fluke by scoring an impressive 5-1/4 length win over Damek in the Devonport Show Cup over 452m, clocking a sizzling 25.31sec which is one of the closest times taken to breaking the record set by Lilli Pilli Lad.

Compacto flew the lids from box six and clocked 5.07s for his first split

that set up his win, although his second split was a slick 11.05 and he ran home powerfully to stop the clock at 26.04s to score by 8-1/2 lengths from Jenmar Joker with Innisfree Miss a half-head astern.

Just prior to venturing across Bass Strait, Compacto had only modest form on provincial tracks such as Healesville and Lismore but he was the winner of the $60,000-to-the-winner Warrnambool Classic.

Star Tasmanian sprinter Damek powered his way into this week’s Betfair Gold Cup final with an impressive win in his heat.

Damek was attempting to register his 19th win from his 23rd start on the track and while it wasn’t the quickest he’s covered the 461 metres it was arguably one of the most impressive.

He was only fairly away from box four and when he was crowded nearing the top turn he lost his position.

But as soon as a gap appeared he booted up and turning for home he pinged off the bend and went on to score by almost two lengths from Stylish Michael.

Lika Whisper kept his unbeaten record on the Hobart circuit intact when he held on to win his heat by the narrowest of margins over Place Your Bet.

It was Lika Whisper’s fifth win in succession at Tattersall’s Park.

The Brendan Pursell-trained dog showed his customary early speed to lead from box six and held sway by three lengths turning for home.

Place Your Bet loomed to win about 80 metres out but Lika Whisper refused to wilt and won in a head-bobber in a time of 26.14s.

Place Your Bet was resuming after suffering a leg injury as a result of catching the lure at Devonport in early September.

The race favourite Portrait Ignites ($2.20) was only fairly away from box three and when improving nearing the home turn he copped a severe check and was unable to recover sufficiently to be a contender at the business end of the race.

Mojito made his way into the final with an impressive heat win.

The Debbie Cannan-trained dog began fairly from box two while Pippi’s Gold began brilliantly from box six to lead but Cannan’s dog kept driving along the rail and had control near the top turn.

Once balanced for the run home he sped clear and went on to score by over two lengths from Decembrist that came from well back turning for home.

If Compacto can replicate his heat win he should have the edge in this Thursday night’s final from box two while Damek has to contend with box six.

The connections of the winner of the Gold Cup final will take away $5,000.