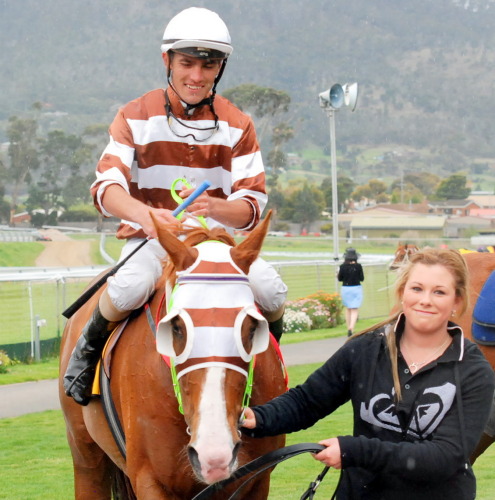 IT took only two starts for former Victorian gelding Conbiani to find winning form for his Tasmanian trainer John Luttrell.

Conbiani scored a strong win in a maiden on the Derwent (inside) track at Tattersall’s Park in Hobart on Tuesday to virtually cover his purchase price.

Luttrell purchased the gelding from Victorian country trainer Ray Besanko for a modest $5000 and he is raced by the trainer’s partner Cheryl Kendall, who also plays a hand in the care of the horse.

Conbiani (Michael Guthrie) settled just off the pace and travelled well to the home turn where Guthrie called on the son of Bianconi to extend and he responded magnificently.

He collared the leader Prefer A Kiss and hit the line three lengths clear of that mare with the favourite Tiger Won’t Tell a close-up third.

“I think he will win a couple more for me.”

“We bought him from Barry Besanko and after his first run and his first win today he has already paid back his purchase price. Its money in the bank” Luttrell said.