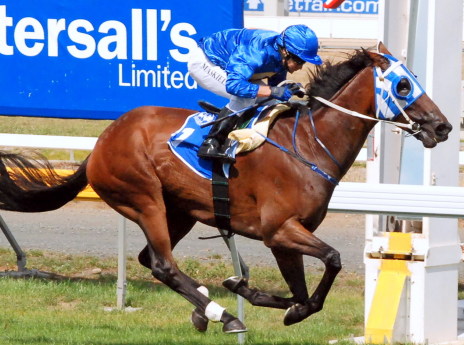 ONE of Tasmania’s most popular horses Conquering was last Friday night inducted into the Tasmanian Racing Hall of Fame at a special awards night at Tattersall’s Park in Hobart.

One of Tasmania’s greatest racing administrators and owners, Thomas Lyons was upgraded to Legend status.

The following are excerpts from the inductee screeds presented on the night:

CONQUERING was a truly modern day champion with his feats in feature races in Tasmania unlikely to be repeated by many – if any.

Bred by the Runnymede Stud and trained throughout his career by Charlie Goggin, Conquering amassed 22 wins and 23 minor placings from 80 starts for stake earnings of almost $900,000.

The gelded son of Dangerous from the Acidity mare Currently won races each season he competed.

As a three-year-old he won a classic over 1600m and was placed fourth in the Tasmanian Derby beaten a length.

He ventured to the mainland at four and won at Flemington (1430m) while on home soil he won the weight-for-age St Leger.

At five he won at weight for age and won his second St Leger in Launceston.

But his best season was as a six-year-old.

He set a modern day weight carrying record when he started his campaign with a win in an open handicap over 1100 metres at Elwick carrying 65.5 kg.

Conquering made a clean sweep of the five feature weight-for-age races on the calendar that included the Thomas Lyons, Kevin Sharkie Tasmanian Stakes and the George Adams.

He also was placed second in the Crystal Mile at Moonee Valley.

The following season he won twice including a win at Sandown in Victoria.

As an eight-year-old he placed second in the Listed Seymour Cup (1600m) in Victoria before ending his campaign by winning his second weight-for-age Thomas Lyons that was one of his greatest victories.

Conquering was one of the best and most consistent gallopers to grace a Tasmanian racetrack and few Tasmanian-bred and owned horses have won on every metropolitan track in Victoria.

He loved to race and his courage was unquestionable. He departed this life on 11 September 2011 doing what he loved most.

El Moxie came to Tasmania to begin stud duties in 1991 and, on a national and international basis, is arguably the most successful sire to have stood here.

He has sired more than 305 individual winners including 15 stakes winners and 15 stakes placegetters.

His most successful son was champion Hong Kong sprinter Silent Witness who won 18 races and $8.4 million. He was dual winner of the Group 1 Hong Kong International Sprint, one of the world’s most prestigious races. Overall, he won nine Group 1 races.

Alfa won the 10 races and $885,000 in a career cut short by injury. His highlight win was in the Group 1 Caulfield Guineas.

El Mirada won seven races and $1.13 million. His Group 1 win came in the All Aged Stakes in Sydney when he upset world champion mare Sunline.

MICHAEL HODGMAN remains the longest serving elected committeeman of any principle race club in the world.

He was elected to the committee of the Tasmanian Racing Club in 1965 at age 26 and during his 47-year tenure he has been an active member serving as Vice-Chairmen three times and in 1981 he was honored with life membership.

Michael’s commitment to the TRC, which has lasted almost five decades, was sparked by his love of horses.

He entered politics in his twenties with stints as the Member for Huon in the Legislative Council before entering the Federal arena as the Member for Denison for 12 years followed by re-entry into state politics until his retirement in 2010.

Despite his hectic workload, Michael was also a successful owner-trainer over a period of about 20 years with his best performed galloper General Holt.

He served as a Tasmanian delegate to the Australian Principal Clubs Conference for over 25 years and during this time he more than once drafted and amended the Rules of Racing.

Michael has been an invited special guest speaker at Carbine Club lunches across the nation, confirming his popularity as one of the best known racing personalities in Australia.

THE late Dick Bertram is credited with being the inspiration and driving force behind the development of the joint racing complex at Mowbray _ firstly, as a combined thoroughbred and harness facility and later a tri-code venue.

His crowning glory was the opening of the new complex in 1987, but his involvement in racing started many years before.

After joining the Newnham Racing Club in the late 1950s, he was appointed to the committee in 1960 and promoted to chairman five years later.

In 1970, he joined the committee of the Tasmanian Turf Club and was appointed chairman in 1976. At 48, he was the youngest chairman in the club’s history.

He remained as chairman until 1987 when he stepped down due to ill-health but was persuaded to remain on the committee and served as deputy chairman.

He retired from the committee 12 months later.

His replacement in the top job, Rod Thirkell-Johnston, paid tribute to Mr Bertram on his retirement, saying that he had served racing with “distinction, dedication and honour” and his contribution to all facets of racing had been outstanding.`

Mr Bertram was the inaugural chairman of the Tasmanian Principal Clubs Board later renamed the Tasmanian Thoroughbred Racing Council.

Claude Best was born at Ulverstone and began training racehorses soon after returning from active service in World War II.

He moved to Deloraine and took over the stables previously occupied by his uncle Bern Barry who had stabled alongside another Hall of Fame inductee Mal Gerrard.

Best then moved to Kangaroo Valley in New South Wales with his wife May and his young family after being offered a job to train privately for Pitt Street farmer Ken Clark.

He later returned to Tasmania to take over training horses for prominent owners Gordon and Shirley Jennings at Runnymede Stud.

He headed the Runnymede operation and some of the many good horses to come under his care were Cardinal Courage, Cardinal Court, Caliante, Monarchist, Golden Petrel, Great Tap, Relko Star and the mighty mare Bow Mistress.

During this time he also prepared Sungleam, Private Property, Private Street and Private Lane for his brother John Best.

Best’s next move was to Hagley House where he was the private trainer for Sir Donald and Lady Trescowthick.

Along with trainers Walter McShane and W A “Tiny” Wells he worked tirelessly to form a Tasmanian branch of the Australian Trainers Association.

Best passed away in 1998 but his family remain deeply involved in racing with his daughters Maree and Geraldine married to Leon Wells and Gary Glover respectively.

His son Michael was once an amateur jockey in NSW and eldest daughter Marlene produced two sons who remain actively involved in the industry.

STAN AITKEN remains the only Tasmanian jockey to have won the W S Cox Plate at Moonee Valley.

The win aboard Taj Rossi in the 1973 Cox Plate was the highlight of Aitken’s long and successful career in the saddle.

Lured from Penguin on Tasmania’s North-West Coast in 1967, Aitken was first attached to Benalla trainer Jack Whitelaw before transferring to Neil Crichton at Caulfield and then to the master of apprentices Frank King.

He won the Victorian apprentices’ premiership twice in 1970-71 and 1972-73 and apart from the Cox Plate his other major race wins included the 1973 George Adams Plate on Taj Rossi, the 1974 Blue Diamond Stakes on Forina, the 1999 Ascot Vale Stakes on Spargo and he combined with the brilliant Bletchingly for four victories.

He rode for a season in Hong Kong in 1985 and for the remainder of his career he was content to be based in the Victorian country town of Ballarat.

When he relocated from Caulfield to Ballarat and had success with the late Noel Kelly and Robert Smerdon.

He had his last ride at the Ararat Gold Cup meeting in November 2003.

Aitken, 59, remains a member of the course management team of the Ballarat Turf Club.

THOMAS LYONS was one of the inaugural inductees into the Tasmanian Racing Hall of Fame’s Associate category and deserving of his elevation to Legend status.

Lyons was born in Hobart and educated at Hutchins Private School. He spent much of his early adulthood as an accountant with The Bank of Van Diemen’s Land.

He became one of Tasmania’s most influential businessmen after taking up a position with George Adams’ Tattersall’s that operated lotteries interstate.

He was a lover of horses and his passion for thoroughbred breeding and racing was second to none of his era.

Lyons became a member of the Tasmanian Racing Club in the 1890s and served as a committeeman from 1900.

During his tenure he held the position of chairman from 1915 -1932 with his election to the position referred to in Bert Wicks’ book “Men Of Influence” – as the Tomas Lyons Era.

The years Lyons spent at the helm of the TRC are still regarded as one of the top administrative periods of the club’s existence.

Lyons was afforded life membership of the TRC and to this day one of the most sought after weight-for-age races on the Tasmanian calendar bears his name – The Thomas Lyons Stakes.

His foray into breeding began in 1912 when he bought the mare Oakdene that went on to produce multiple feature race winners including Talisman that won the 1921 Hobart Cup, a race he also won in 1929 with Prince Viol that he bred from a daughter of Talisman (Princess Vimmy).

Lyons won six Hobart Cups that included a dead-heat between his to stayer Nadir Shah and William Southerwood’s Trusty Blade.

On a more personal note Lyons had a reputation as man who was patriarchal with his family and was credited with being as shrewd a judge of men as he was of horses as well as being a person with a deserved reputation for generosity.