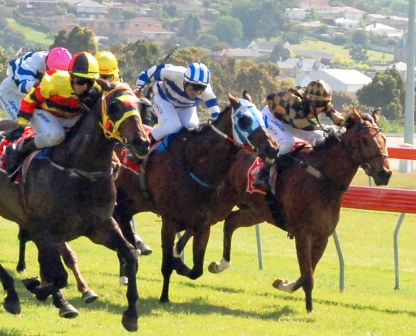 Conquering went around in an open handicap over 1600m with apprentice Nathan Rose aboard and had to settle for fourth behind Tindal.

The Charlie Goggin-trained gelding led and looked comfortable in the run but when Rose attempted to slow the pace, the rider of Mondano (Chris Symons) sent his charge around the field to test for the lead and surprisingly Rose handed up.

That horse finished closer to last after leading into the straight while Conquering was working home hard to finish on the heels of the placegetters.

Goggin indicated Rose may have erred in his judgment but was not prepared to lambast the talented young rider.

“I was surprised Nathan slowed the pace when he did and allowed Mondano to take up the running,” Goggin said.

“But the race is over and we have to move on,” he said.

Goggin said Conquering would have a short break and would most likely head back to Melbourne in August.

Meanwhile two of his younger stable stars, three-year-old Too Many Reds and two-year-old filly Rose Of Scotland arrived back at the stables today and would embark on a training program that should see them return to racing in about three months.

Rose Of Scotland and Too Many Reds were tried in feature races in Adelaide in March after performing well in Tasmania.

Too Many Reds won three in succession, including two feature 3YO races, prior to tackling the $201,000 Yalumba Classic at Morphetville in which he finished near last.