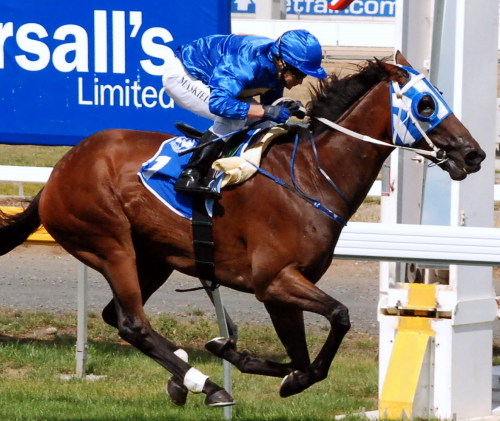 THE return to form of star Tasmanian sprinter-miler Conquering has renewed interest in the weight-for-age series of races to be run over the next two months.

Conquering’s brilliant win in a weight-for-age race over 1400 metres under lights in Launceston last Thursday night was his first appearance in the winner’s circle in almost a year to the day.

The Charlie Goggin-trained eight-year-old made a clean sweep of the state’s weight-for-age races two seasons ago which earned him the horse of the year title.

He was very competitive the following season but issues with trialling and travelling prevented the champ from recapturing his best form.

This season he has progressed steadily with some impressive performances interstate but all of the failures paled into insignificance when he powered his way to victory last week.

“If you have a close look at this horse’s form you’ll see he hasn’t been racing poorly. He’s probably been a victim of bad barriers and bad luck in some of his races,” Goggin said.

“If you take the Crystal Mile at Moonee Valley in October as an example, Conquering drew an outside gate and Gathering drew barrier one yet my horse was very competitive and finished less than three lengths from Gathering (sixth).”

“Gathering won the $1 million Group 1 Railway Stakes over 1600 metres in Perth (WA) at his next start.”

“Conquering’s form hasn’t dropped off, it’s more about him having to run in some races that simply didn’t suit.”

“Obviously big weights have been a problem for him in handicap events in Tasmania which is why we have to target the weight-for-age races,” he said.

Conquering will have his next start in the weight-for-age Kevin Sharkie Tasmania Stakes over 1600 metres at Tattersall’s Park Elwick on Sunday week.

Goggin also is expecting his talented three-year-old filly Rose Of Scotland to measure up in a few of the feature races in the coming months.

The filly finished a gallant second to Socks in a 3YO handicap over 1400 metres in Launceston last week and the pair looks set to clash again in the Listed Tasmanian Guineas over 1600m under lights in Launceston on January 6.

“I was very pleased with Rose Of Scotland’s effort last week and she’s pulled up well from the run,” Goggin said.

“She’ll have one more run and provided she comes through that race in good shape she’ll progress to the Tasmanian Guineas,” Goggin said.

Rose Of Scotland (Stratum-Ares De Lago) won the Tasmanian Magic Millions 2YO Classic (1200m) last season after which she ventured to South Australia to contest the SA Magic Millions Classic at Morphetville in which she finished a fast-finishing fourth behind subsequent Group 1 winner Toorak Toff.

“If everything pans out as we hope then Rose Of Scotland will most likely head to the Tasmania Oaks and maybe run in the fillies’ Thousand Guineas (1600m) along the way,” he said.

Goggin also is expecting his talented four-year-old sprinter Too Many Reds to measure up to weight-for-age next month.

Too Many Reds failed as the $1.80 favourite at his latest outing at Devonport last Sunday, finishing fifth, but Goggin said there were excuses.

“Too Many Reds was caught three-wide for a long way carrying 59kg and he was facing Devonport for the first time, so I wouldn’t read too much into the run,” Goggin said.

“He’ll have a little break and head to the 1200-metre weight-for-age in Launceston at the end of January and if he handles that assignment then we’ll have a look at the Thomas Lyons (weight-for-age over 1400m),” he said.