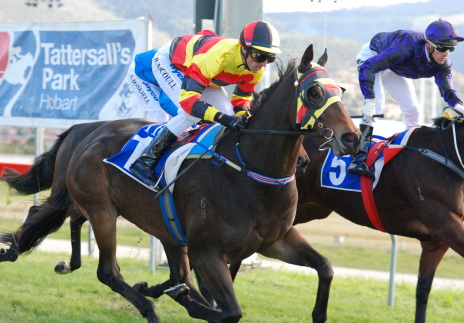 Longford trainer Bill Ryan declared the Sires as the youngster’s main mission after the gelding scored an impressive win Boags Premium 2YO Maiden over 940 metres at Tattersall’s Park in Hobart on Sunday.

Crown Consul had been placed at his two previous outings over 1199 metres so it was a masterful training feat to have the gelding fresh enough to triumph over the shorter journey (940m).

“We have always had the Sires Produce (1400m) on the radar as this horse’s main target this preparation so to win over the short trip is a bonus,” Ryan said.

“We’ll nominate him for the $40,000 Autumn Classic here inHobartnext Sunday but it will depend on how he is later in the week as to whether we accept for that race,” he said.

Crown Consul was purchased from the Tasmanian Magic Millions Yearling Sale for only $4500 so he has already paid for himself with his career prize money already totaling almost $12,000.

“I’ve always liked this horse and if I’m right he will develop into a very good three-year-old with capabilities to be strong over middle distances,” Ryan said.

Crown Consul is only Econsul’s second winner in Australia