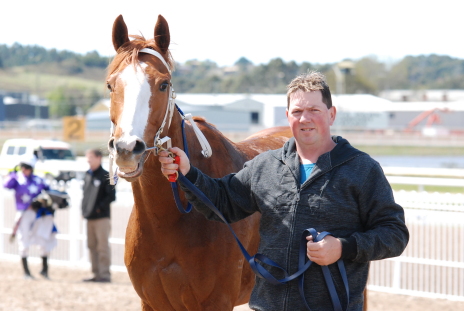 TEVE DAVIS is one of the few trainers in Tasmania to dabble in both thoroughbred and harness codes at the same time.

At Spreyton last Sunday wearing his thoroughbred cap he prepared Cool Partner to score an impressive win in the Caltas 3YO and Upward Maiden Plate over 1150 metres.

With talented rider Kelvin “Iceman” Sanderson aboard the gelding settled fourth and travelled well to the home turn where Sanderson called on his charge to set sail after the leaders.

The gelded son of Partner’s Choice drew alongside Vivre Le Claire that had collared race leader Bring me Sunshine at the top of the straight and went on to defeat that horse by almost a length with Bring Me Sunshine hanging on for third about three lengths astern.

Cool Partner was resuming from a lengthy spell but presented like he had done plenty of work leading up to his first-up assignment.

Cool Partner is a five-year-old but was having only his fourth start.

“This horse was definitely a late maturer but he is starting to discover what racing is all about,” Davis said.