Coongy next stop for Dream Pedlar 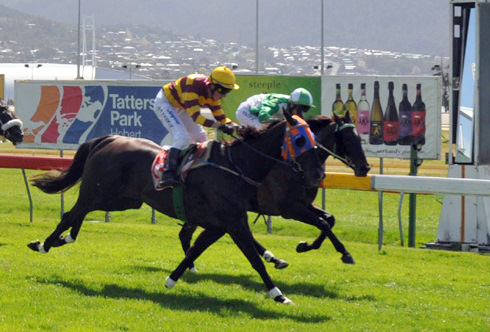 Dream Pedlar (Danny Nikolic) lived up to his trainer’s expectations when he scored narrow over Sylvan O’Reilly and Golden Charmer with another Tasmanian -owned gelding Wealthy Lad a game fourth.

It was Dream Pedlar’s first win away from home soil.

Nikolic had Dream Pedlar settled fourth and handy to the leader Wealthy Lad throughout and when he called on the son of West Quest for the supreme effort he responded magnificently and hit the line hard.

“This is the win we needed to give him a chance of getting into some other good races in the coming weeks,” Blacker said.

“I was looking at7 a race at Flemington on Melbourne Cup day but the way he went today I am more inclined to head to the Group 3 Coongy Handicap (2000m) on Saturday week (Caulfield Cup day),”he said.

Dream Pedlar has been Tasmania’s best stayer for the past two seasons. He was placed in last season’s Hobart, Launceston and Devonport Cups but Blacker said he is no good thing to be back in Tasmania for next year’s feature cups.

“We are here in Melbourne to concentrate on races over here and that’s our first priority,” Blacker said.