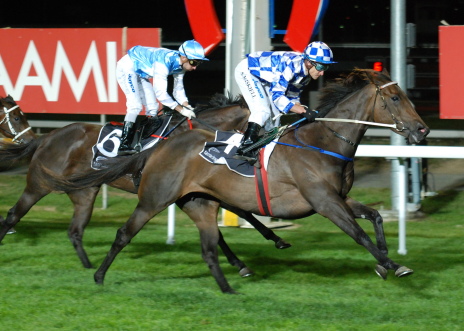 LIGHTLY raced five-year-old mare Copper Dancer made a brilliant return to racing tonight with an emphatic win in the Ticking Away Class One Handicap over 1200 metres at the TOTE Racing Centre in Launceston.

It was Copper Dancer’s first start in almost a year to the day but she made light of the task and delivered the knockout blow to her rivals within he blink of an eye over the concluding stages of the race.

She was heavily backed to start the $2.20 favourite and she won accordingly.

It was her second win from only four starts with her other win coming at her second outing in a race in Hobart at the end of February last year.

Jockey Stephen Maskiell allowed the mare to settle just beyond midfield and he made his move when the leaders started to lift the tempo nearing the 500-metre mark.

The leader Modo Vinco ($7.50) kicked clear at the top of the straight with the well-backed Bazanne ($5.70) emerging as a serious threat 200 metres out.

But that’s when Copper Dancer put in the big strides and she went on to score by almost a length from Bazanne with Modo Vinco hanging on for third ahead of outsider No Attendance ($21).

Copper Dancer’s trainer Mark Ganderton was delighted with the win and explained why it had taken so long to get the mare back to the race rack.

“She was like a coat rack (skinny and bony) so we had to put her out for a decent spring break with the hope she would put on weight and I thought she looked the best I’ve ever seen her in the yard tonight,” Ganderton said.

The trainer has plans to take the mare to Victoria but has yet to decide on a specific target.

“I’m taking Revenging to Victoria for a race at Ballarat on April 22 but I anted to wait and see what this mare did tonight before making any form plans but she’s definitely earned a trip.”

“I’m also having to send both horses (Revenging and Copper Dancer) away because there just aren’t enough suitable class two races for them here in Tassie and I think it’s time something was done to try and correct the anomaly,” he said.

Copper Dancer is part-owned by Bruno Calabro who is a long-time client of Ganderton’s stable.

While connections of Copper Dancer celebrated, Irish jockey Ronan Keogh was dealt another bitter blow before the starts of the race when his leg was crushed in the barrier stalls and was rushed to the Launceston General Hospital with a suspected broken right upper leg and major damage to his right knee cap.

It happened while his mount Kinksky was being loaded into the barrier stalls.