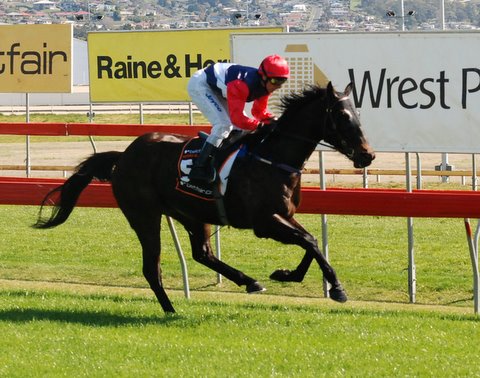 LIGHTLY raced four-year old gelding Striking Copper led from start to finish on Wednesday to record his first victory in the 1100 metre Maiden at Tattersall’s Park.

Striking Copper, prepared by Seven Mile Beach trainer Jason Clifford and ridden by Brendon McCoull, was able to set the pace after an erratic opening with jockeys trying to find the best ground after jumping.

From barrier one, the gelding got the right run on the rails and pulled away at the fifty metre mark to win by five lengths over Left Ear with Remmi Raider finishing a length astern.

“He ran a really good race first up and showed us he had something” Clifford said.

“It seemed to be nice going jumping out from the inside barrier and it worked out well as he ran the rail for a good solid win.”

Bought at the 2008 Tasmanian Yearling Sales, Clifford believes he is still a while off his best.

“He has showed us a lot of ability. He is a little bit weak in body at the moment and not quite handling the hard work”.

“He is an immature horse, probably six months of maturing but I think he will be a real miler” Clifford said.