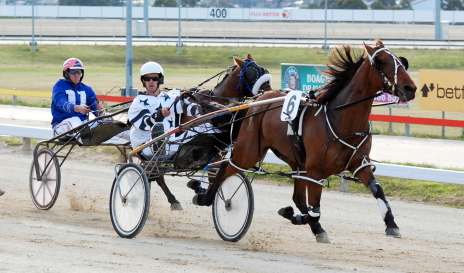 BREADALBANE-BASED harness trainer Ben Yole has found the secret to his five-year-old gelding Coruba Run n with the five-year-old aiming for three successive wins when he steps out in a C1-C2 race over 1700 metres on the synthetic track at Spreyton today.

Caruba Run had been running the odd lacing until Yole tried a few different things with the gelding’s training regime and he added or removed pieces of gear.

Caruba Run raced three-wide without cover for al most the last lap at the Devonport club’s meeting at the Devonport Showground last Thursday night and he followed up with another game effort to win a C1 in Hobart last Sunday night.

“This horse has been promising to string a few wins together and we’ve finally worked him out,” Yole said.

“I thought his win in Hobart on Sunday was excellent because he had to work hard to find the breeze outside of the winner (raced outside the leader) but he proved too strong.”

“His biggest asset is that he’s tough so if he has a bit of luck on the synthetic track on Wednesday he has a good chance of making it three wins in succession,” he said.

Tasmania’s harness racing’s experiment with racing on the synthetic thoroughbred track at Spreyton Park moves to another level today with the second of four meetings to be held at the venue this season.

It’s a seven-race card boasts 66 acceptors, which compared to the Carrick meeting at the same time last year that boasted 62 acceptors it is an excellent outcome.

The first harness meeting held on the Tapeta synthetic track at Spreyton Park in late July received race reviews from participants and punters.

Today’s meeting will be held in a twilight timeslot with the first race scheduled to start at 2.33pm and the last to go at 6.13pm.