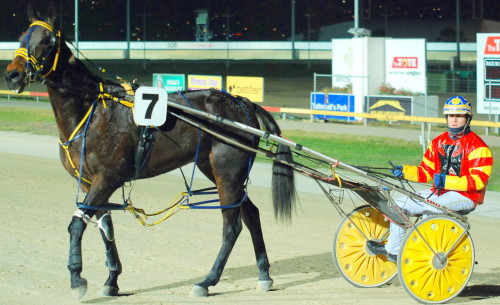 CLASSY seven-year-old pacer Cosmic Under Fire rewrote the record books when he powered home off a back mark of 40 metres to win the time-honored Big Park Show Cup over 2200 metres at The TOTE Racing Centre in Launceston on Sunday night.

The race was first run almost 100 years ago and it was the first time the race has been won from a back mark since the metric system was introduced in 1972.

But The Michael Laugher-trained gelding did it with consummate ease.

Victorian driver Grant Campbell, who prepares the horse when he races in Victoria, allowed Cosmic Under Fire to settle into his gear at the rear of the field and waited until the bell before latching onto the back of the three-wide train for the final 800 metres.

Cosmic Under Fire eased out to make his charge in the home straight and had the race in his keeping 100 metres out.

He went on to defeat Ulos that faced the breeze and looked the winner halfway up the home straight, with race leader and the second favourite The Music’s Over hanging on for third.

Cosmic Under Fire races out of the Michael Laugher stable when campaigning in Tasmania with this latest outing his 10th for Laugher producing five wins and as many minor placings.

Of Cosmic Under Fire’s 23 career wins, 10 have been from standing starts but Campbell said it was arguably the gelding’s best win.

“This is the toughest mark (40 metres) he’s had to contend with but it just goes to show how tough he is,” Campbell said.