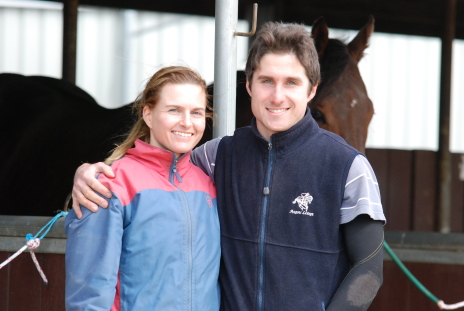 WHEN Tasmanian-born horsewoman Anita Bell strolled into Gai Waterhouse’s stables in Sydney just over five years ago she was determined to make her way through the ranks and become one of Sydney’s top trackwork rider.

She quickly made her mark at Randwick but what she didn’t count on was falling in love.

Adam Roustoby had been working at Waterhouse’s stable as a trackwork rider for a while and had no romantic ties but when Bell walked into the yards he too was smitten by the Tasmanian with the golden locks.

The relationship took no time to blossom and three years ago they relocated to Tasmania as a couple and they have since earned reputations as two of the best trackwork riders in the state.

Riding up to 40 horses a morning between them, they have carved a niche in the market and further down the track Bell has hopes of pursuing a career as a trainer.

Bell has already trained a winner but she has relinquished her trainer’s licence to concentrate on trackwork riding.

The duo ride work at Brighton six days a week and they also venture out to Charlie Goggin and Luella Meaburn’s training complex at Runnymede to ride work and also to attend to Bell’s couple of horses that she has residing at the property.

Roustoby also works at Tasmanian Racing Club meetings at Tattersall’s Park as a clerk of the course.