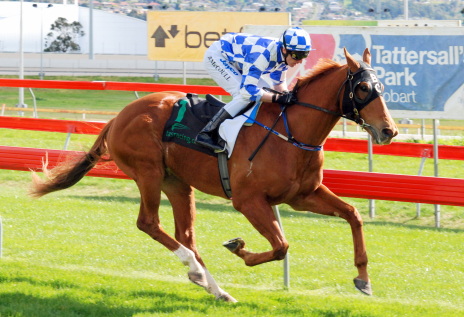 SPREYTON-based trainer Barry Campbell expects well-bred four-year-old Cricketer to make a name for himself in Tasmania given the ease with which he dispensed with a field of maiden performers at Tattersall’s Park in Hobart on Sunday.

The gelded son of Choisir made quite an impact at his Tasmanian debut, leading all the way to score by almost seven lengths without ever being fully extended.

With the state’s leading rider Brendon McCoull aboard, Cricketer jumped well from a wide gate and landed in front.

McCoull was able to settle the big free-striding chestnut gelding and when he urged him to sprint at the top of the straight he let down like a good horse.

Cricketer is owned and raced by Bruno Calabro and partner who bought the gelding for “not a lot of money” according top Campbell.

Campbell said the horse made his debut at Kembla Grange in NSW in December last year but at his subsequent outing at the same track suffered a bleeding attack.

Story and photographs by Peter Staples.

Listen to what trainer Barry Campbell had to say about Cricketer’s win – click here .