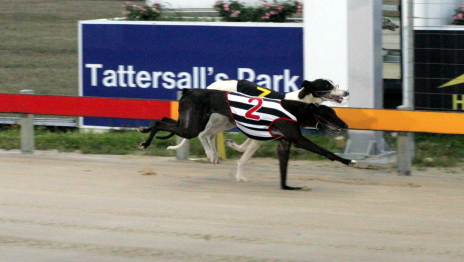 PARK BEACH trainer Darren Critchley has not been a regular visitor to the winner’s circle in recent times but the drought was broken at Tattersall’s Park in Hobart last Thursday night.

Critchley’s lightly raced pup Greysynd Merry scored an upset win at odds of almost 70-1 when she chased down tearaway leader Shining Lomar to score by a nose, much to the dismay of most punters.

Shining Lomar, from the Leon Brazendale kennel, also was at bolter’s odds starting at $50.

Greysynd Merry may have been a despised outsider in betting but the bitch went onto the race on the back of a much-improved effort at her previous outing when third to Bearville Phil at the same venue a week earlier.

The winner’s time of 26.84 over the 461-metre trip was hardly exciting but it was the way the daughter of Path To Power went about chasing down the leader that impressed most and suggested she is heading in the right direction.

Those who fancied Critchley’s bitch would have been rolling in money as the exotic bet types paid enormous with the Exacta returning $1235 on SuperTab which was only a few dollars less than what the trifecta paid.