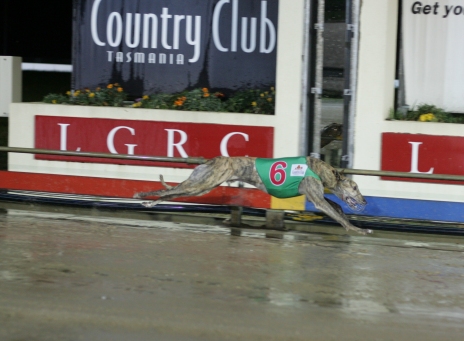 Normally a bold statement like that may have a few detractors but having spoken to a great number of industry participants since last night’s feature wins I believe the Industry agrees.

Ming Dynasty trained at Brighton by Susan Gittus has a terrific record over the 720m at Launceston.

This daughter of Chinatown Lad has now won six straight and will go into the Group One Final chock full of confidence.

Last night after beginning only fairly, as usual, she gave Thirteen Black almost eight lengths turning into the home straight but picked him up before the line to win going away by two in 43.52.

Leica Taipan added some value to the trifectas running third at $45 for Sonia Martin 5 1/4 lengths away.

Damek won the State Sprint Title he was so cruelly robbed of last year when the mighty Tombstone Jack grabbed him on the line after leading to the shadows of the post.

Last night tracking Ella Lucy across from five this son of Big Daddy Cool sat nicely on her back around the first turn.

Down the back straight he was unsure whether to go inside or outside her and for just a moment it looked like he couldn’t rail and would have to go around, then as he pushed a fraction more she moved off just a half body length off and he had the opening that he wanted.

In the twinkling of an eye he slipped through to grab the lead and with his accelerator flat to the floor he put two lengths on her and was strong up the straight and on the line to win by 4 3/4 lengths in BON 29.94.

Ella Lucy was a gallant and gutsy runner up while another outsider Hellyeah Geoff grabbed third a further 3 lengths away.

Peter Phillips was delighted with ‘Archie’s’ run and is hoping to give him a look at Albion Park before the Group One final.

Susan Gittus was thrilled not only for Ming Dynasty but also to be taking her to race in Queensland, the home State of owner Paul Felgate who has contributed greatly to Susan’s success over the last two to three years.

The Albion Park circuit should suit both greyhounds and the whole of Tasmania’s Racing Industry wish Damek and Ming Dynasty the best of luck as they represent us in Queensland.