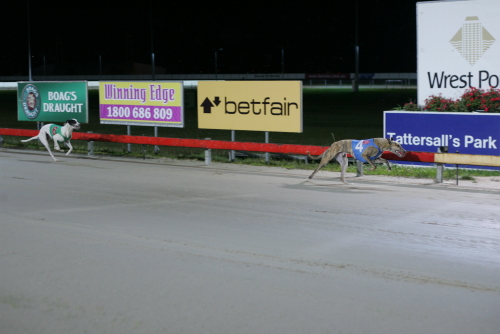 TASMANIAN flying machine Damek issued a loud warning to all comers due to arrive for the upcoming Group 1 Hobart Thousand series when he scored another effortless win on the Hobart circuit last Thursday night.

Damek broke 26 seconds on a bog track on his way to an effortless win in the Betfair Gold Cup final to keep his unbeaten record on the Tattersall’s Park circuit intact.

He defeated Victorian Hobart Thousand candidate Regal Love by almost six lengths and to add more credence to the effort the race was run during a torrential downpour.

The Eileen Thomas-trained dog has never been threatened from 11 attempts on the Hobart U-bend layout and with ownership of the 461-metre track record (25.79) that he set two weeks ago, it will take a true champion to outgun him on his home turf in the Hobart Thousand.

Only chronic bad luck will prevent Damek from winning his Hobart Thousand heat in a fortnight.

If that eventuates then whatever else is in the race will need to be toting his or her best form to outshine the local star.

It has been a long time since Tasmania has boasted a greyhound that is the benchmark of a Hobart Thousand series.

Damek’s owner-breeder Peter Phillips can’t get the smile off his face and who can blame him.

He also will have Damek’s litter brother Decembrist in the series and if that dog has an ounce of luck in his heat he could help Phillips to a Hobart Thousand quinella to replicate the feat of Mick Stringer two years ago when his dog Little Spaniard defeated kennel mate Topline Doovee.

Decembrist will go into his Hobart Thousand heat on December 9 on the back of a win at Sandown on November 11.

Decembrist won six races at Sandown (2) and The Meadows (4) from 18 starts in Victoria.

Decembrist and Damek are similar in physique but the black dog doesn’t have Damek’s early brilliance.

Damek set the Hobart track record earlier this year but he bettered that in October.

But his time of 25.79s in a Gold Cup heat proved beyond doubt Damek is the most exciting greyhound to grace our tracks since Lilli Pilli Lad that still holds the Devonport 452m track record.

Damek’s second split on the Hobart track is the secret to his dominance.

He doesn’t begin brilliantly but his turn of foot after travelling 20 metres is amazing.

Once he gets into stride the motor switches to overdrive which usually leaves his rivals in his wake.

Damek has been beaten only once in 23 starts in Tasmania and that was by Tombstone Jack in the state final of the National Sprint Championship.

With no disrespect to Tombstone Jack, Damek was not at his best that night and was found wanting at the business end of the race.

Damek has ventured to Victoria twice this year and both times he failed to flatter.

He suffered badly from travelling, which is something connections are hoping he can overcome in the future.

Whatever happens in the next three weeks Damek’s owners are already planning to send Damek to stud in Victoria.

Amakler Girl had better splits of 5.19s and 11.26s but her overall, time of 26.85s suggests she struggled at the business end of the trial.

The club expects this year’s race to boast the best line-up ever but if the big stars don’t come it could turn into a benevolent race for Damek.

The local champ is finally getting the media attention he deserves in his home state and while he has his share of knockers in Victoria the dog has the chance to silence them in the coming weeks.