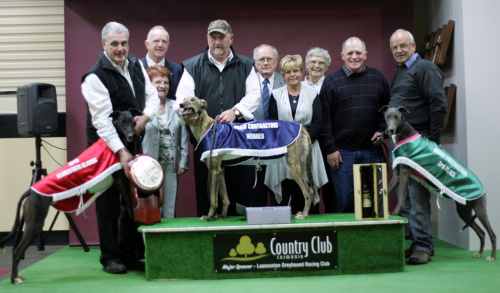 STAR Tasmanian dog Damek kept his unbeaten record intact and broke his own track record in the final of the Illingworth Classic over 515 metres in Launceston tonight.

The Eileen Thomas-trained dog set the track record in his Illingworth heat clocking 29.45 but on Monday night he carved that up with a sizzling run of 29.40.

Damek began fairly from box two but was headed by his litter brother Decembrist (3) who looked set to lead the field into the first turn.

But Damek burrowed up along the rail to hold a length advantage on his brother when they wheeled into the back straight.

He stretched his lead and hit the line with almost five lengths to spare over Decembrist with Kialdu Anna 6-1/2 lengths away third.

Damek (by Big Daddy Cool) is trained at Invermay by Eileen Thomas and the dog is owned and raced by Peter and June Phillips who bred him from their outstanding broodbitch World’s Finest.

Mrs Phillips said the Illingworth Classic win gave her one of her biggest thrills in racing.

“We’ve never won the Illingworth Classic and it was especially nice because Ian Thomas (trainer’s husband and the dog’s handler) had always wanted to win the race,” Mrs Phillips said.

“It is great to have a dog that is so talented but when I look at him all I see is my little Archie that used to cuddle up next to me when he was just a puppy.”

“I also was pleased for my husband (Peter) because he trains Decembrist who ran a terrific race to chase his brother home,” she said.

Damek is expected to make his interstate debut at Sandown on Thursday week when he tackles a heat of a grade five series.

“We’ll go to Melbourne and then we might have a look at the WA Derby but first we’ll see how he travels and performs in Melbourne,” Thomas said.