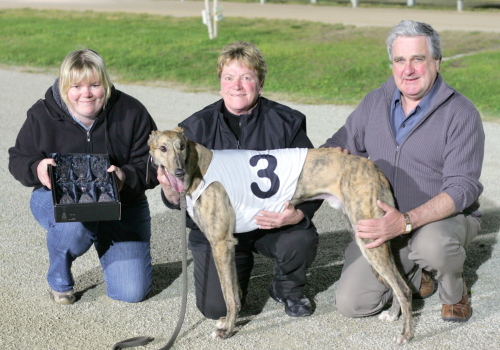 STAR Tasmanian dog Damek was last week named as one of 22 candidates for a spot in the $100,000 winner-take-all Topgun to be run at The Meadows later this month.

While the dog’s three previous interstate sojourns have proven unsuccessful his impeccable record on home soil keeps him in the hunt for a berth in the prestigious sprint race that is made up of invitees only to be run over 525 metres on October 23.

Damek has notched 16 wins from 17 starts in Tasmania with his latest in the St Leger over 461 metres in Hobart on Thursday night.

At his latest outing he again showed early brilliance to lead from box three and once on the lure he left his rivals in his wake with a slick second split and hit the line five lengths clear of Mushy Peas with Top Choice almost four lengths astern.

The dog’s trainer Eileen Thomas said she was thrilled that Damek is being considered for a place in the Topgun and confirmed the dog would make the trip across Bass Strait if invited to be one of the starting eight.

If Damek gain a berth he would most likely head to Victoria well in advance of the race so as to give him time to settle in.

The last three times he has not travelled well and has been forced to race too soon after arriving.

The dog’s owners have an association with the Bob Douglas kennel so connections might opt to prepare the dog out of his kennels.

Tasmania’s entrant at the recent National Sprint Championship Tombstone Jack also is amongst the 22 nominees but the Queensland-owned dog is no longer trained or domiciled in Tasmania.

Tombstone Jack was prepared in Tasmania by Stuart Genge who did a brilliant job getting the dog into the national final in which he finished an eye-catching third.

However the dog’s owners opted to relocate the dog to Victoria.