Damek sizzles and earns trip back to Vic 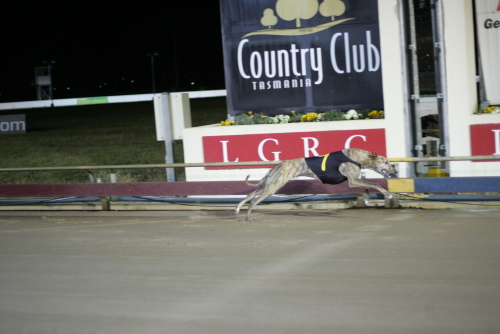 Damek jumped brilliantly from box rise and gave his opposition little chance as he extended his lead down the back eventually winning by 6 3/4 lengths in a fast 29.76.

Trainer Eileen Thomas is nominating him for The Meadows on Saturday night and all of Tassie will be hoping for a victory on “foreign” soil.

Litter brother Daegan made it a double for Thomas after jumping well and leading throughout to win.

The Furniture City Bracelet Heats saw Kialdu Anna gain victory over the luckless High Choice in Heat One, while Reg Dickenson’s Fran Lee led all the way in Heat Two.

Susan Gittus had a memorable night with a treble of wins Mambo Light, Ghost Sky and Buckingham Heir but celebrations were tempered with the retirement of her smart bitch Common Interest through injury.

Hobby trainer John Wilton looks to have a smart one in his kennel after Exaltation won his Juvenile by 11 3/4 lengths in a quick 30.01, while Hobart top grader Ridicule managed to pip odds on favourite Hellyeah Jacko to win the last leg of the quadrella.