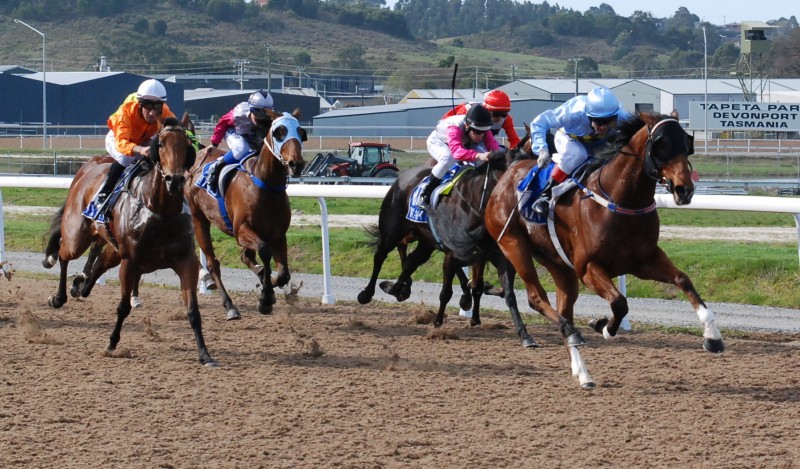 LIGHTLY raced four-year-old Darchill has not been a favourite of punters during his short racing career despite having won three of only 12 starts for Spreyton trainer David Miller.

Darchill finished beyond midfield at his last four runs before being sent for a spell in January but his first start this campaign in a BM68 over 1150 metres last Sunday week was good enough to suggest he will make his presence felt at the business end of proceedings in Launceston tomorrow (Saturday) in the feature race The Think Pink Cup over 1200 metres (race 7).

Darchill is by Churchill Downs from Miller’s former star two and three-year-old Darcenell that was retired to stud after her racing career was cut short by injury.

Darchill won two in succession last preparation before his form started to wane.

He will be ridden by Victorian-based jockey Anthony Darmanin who talked up the gelding’s chances this week.

“I rode this horse first-up at Devonport and he gave me a really good feel but just needed the run,” Darmanin said.

“On Saturday we have a good draw (5) and I should be able to get him to use his natural speed and be close handy all the way,” he said.

The Bill Ryan-trained Liluka Belle looms as the main danger as she was impressive in winning first-up on the Launceston track last month defeating Moonless and Tuktoyaktuk that also is engaged in the race as the top weight (61kg) but will receive a three-kilogram advantage courtesy of apprentice Hayley McCarthy who has ridden the grey gelding at both of his starts this preparation.

The interesting runner is Numen Lumen that is having its first start for Ryan.

The five-year-old by Al Maher was bred by the great Bart Cummings from his Thunder Gulch broodmare Good Grace.

Numen Lumen won a 0-68 at Cranbourne in April last year and wasn’t too far away at two subsequent outings before being spelled.

He landed in Ryan’s stables last year and has been to the trials twice for a ,last behind Second Dozen and more recently a near last effort to Flash Al Moon at Spreyton this week.

With the move to Launceston for this year, the local racing industry in Tasmania has thrown its weight behind Saturday’s Think Pink Cup meetings.

It’s a big day for racing and Cancer research with organisers having put together a magnificent program that includes auction items such as stallion service fees, sporting and general items that have been donated by local and interstate firms.

Since this event began in Hobart, it has raised over $200,000.00 for the National Breast Cancer Foundation.

Moving to Launceston for the first time for the seventh year of this annual event, race day Chair Judi Adams has also made some changes for the benefit of the guests attending in the north of the state, including arranging a young racegoers area in the refurbished Colours Room at the Tote Racing Centre, complete with it’s own prizes, entertainment by way of a DJ and live music, finger food and a lolly banquet.

This complements the formal dining upstairs in Silks Restaurant.

No one has embraced this day more than local racing workers Jason Maskiell and Adam Emery.

Both Jason and Adam work in the racing industry and both have been touched by cancer within their families.

For this reason, Jason and Adam are seeking pledges from the public to donate to the cause, even if they (public) are unable to attend on the day.

To show their determination to support this worthy cause, these young men are preparing to have the ultimate shave for charity at this race day, reminding people to ‘think pink’ on Saturday 19 July, and to assist the cause in this public way, raising funds via this event for breast cancer research.

The National Breast Cancer Foundation has a goal to ensure zero deaths from breast cancer by 2030, and it is via community fund raising events such as this popular race day that the not for profit charity raises the money required to fund research projects that ultimately assist the 1 in 8 women and 1% of men diagnosed each year in Tasmania.

If the public wishes to support the Think Pink Close Shave, donations can be made on the day. For those who are unable to attend, but still wished to support Jason and Adam in their Think Pink Close Shave, please visit Sharee Marshall’s store in Launceston, contact Judi Adams on eventstas@gmail.com in Hobart, or donations can be made securely online at the following site.

Donations of $2 or more are tax decuctible.

The Think Pink Close Shave will occur at the Tote Racing Centre Sat 19 July just after the conclusion of race one on the program.