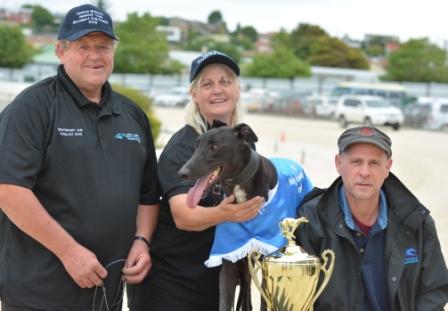 Dark Vito went into the final having won at his five previous starts but despite his impeccable form he was sent out the fourth elect at $4.80 with the sole interstate-trained entry Her Highness and North-West Coast hero Senor Slamma the equal favourites at $4,20.

It was one of the most open Devonport Cups in years and when Senor Slamma flew the lids from box eight to lead those who backed him into favoritism were lining up to collect before they reached the home turn.

But Dark Vito, owned b y Debbie Cannan and Ian Sowell, also began well from box two and had the leader in his sights as they straightened for the run home.

Medhurst’s dog knuckled down to his task and cruised to the leader close to home and went on to defeat Senor Slamma by a length with the winner’s kennel mate Prescribed ($4.60) a closing third just under a length away.

“I have always had a god opinion of this dog and since he recovered from a virus he has gone ahead in leaps and bounds,” Medhurst said.

“This is his sixth win in a row and that’s what only good dogs can do,” he said.

It was a change of luck for Medhurst who had his kennel star Buckle Up Wes retired from racing this week after he suffered a career ending injury (dropped back muscle) in a heat of the Group 1 Paws of Thunder at Wentworth Park in Sydney last Saturday night.

“It was sad to lose Wes from the team but he is Ok and will now become a stud dog,” he said.

Medhurst said Dark Vito is unlikely to reach the heights of Buckle Up Wes but he said the dog might be capable of winning at Group 1 level.

“Dark Vito would have very big shoes to fill if he was to be another Wes but I do think he has the potential to go all the way.”

“He has impeccable manners and he is a very keen chaser so we can only hope that he matures into a top class sprinter,” he said.