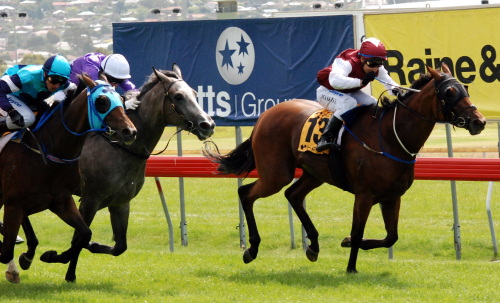 The powerful Lee Freedman stable dominated the feature races on the opening day of the AAMI Tasmanian Summer Racing Carnival.

Two races later Freedman’s promising three-year-old filly also led all the way to take out the $90,000 Listed Betfair Hobart Guineas over 2100 metres with local rider Stephen Maskiell in the saddle.

Chinchilla (Exceed And Excel-Chestnut Star) showed brilliant early speed to lead and when challenged in the straight she found enough to hold out Triple Asset and the well-backed More Awesome.

It was a courageous win and acknowledged by Freedman’s travelling foreman Jamie Stewart.

“This filly possesses a lot of early speed and today she showed that and she also delivered at the end of the race where it counted most,” Stewart said.

Ludka, by Singspiel from the Danehill mare Laleta, was rated perfectly by Maskiell who said his tactics to lead and make his rivals chase was based on his previous experience with riding horses for the Freedman stable.

“I wanted to make full use of an inside barrier and when she had no trouble leading I opted to take the initiative and let her keep rolling and make them work hard behind us,” Maskiell said.

“I thought this filly is going to be rock had fit so she just needs to be rated well and thankfully the plan paid off.”

“It’s great to be able to again ride a big race winner for the Freedman stable and that this horse is owned by Sheik Mohammed is a bonus,” Maskiell said.

Chinchilla and Ludka are raced by the Darley thoroughbred enterprise and are owned by Sheikh Mohammed bin Rashid Al Maktoum. The fillies are the first two Darley-owned horses to race in Tasmania.