Darmanin established as one of Tasmania’s best 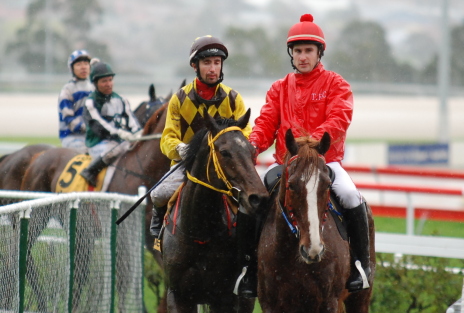 VICTORIAN based jockey Anthony Darmanin extended his lead on the jockey’s premiership table with a double at the Tattersall’s Park meeting in Hobart on Sunday.

Darmanin has been a regular rider in Tasmania for the past 18 months and last season he gave all trainers a glimpse of his worth by finishing third in the premiership race last season behind Stephen Maskiell and Brendon McCoull who rode 64-1/2 and 64 winners respectively.

Darmanin rode 60 winners which was clearly his best season and one that convinced him to target Tasmania as his main source of income.

For such an accomplished rider he gets very limited opportunities in his home state.

Last Sunday’s double came as no surprise as he had good rides throughout the day and could easily have snared at least four winners had the meeting progressed beyond race four.

He partnered the Rhonda Hall-trained mare Skip To The Moon to victory in the Schweppes 3YO & Up Maiden Plate over 1400 metres and in the following race he guided the in-form Neil’s Gold to an emphatic win in the ballast Stone Estate Wines Benchmark 78 Handicap over 2100 metres.

Listen to what jockey Anthony Darmanin had to say about his two wins at Elwick on Sunday – click here .