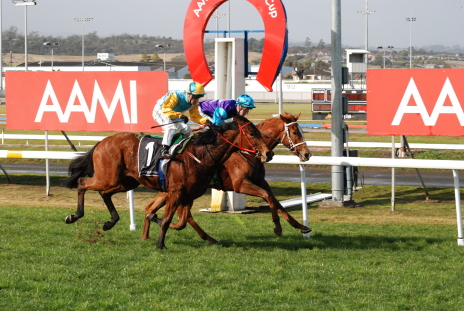 THE gelded son of one of Tasmania’s better producing broodmares won the first race of the new racing season at The TOTE Racing Centre in Launceston today. Dartel showed great courage to emerge triumphant by a nose over Ollie’s Gold with race leader Osborne a close-up third. The Ken and Tania Hanson-trained three-year-old went into the race without having had a trial but Tania Hanson said she was confident he would run a race first-up. “We bought him at the Tasmanian Magic Millions Yearling Sales for about $14,000 for him at the sale and we thought we did well because he was a nice type and the mare Dartington has been a good producer,” she said. Listen to the entire interview with Tania Hanson and rider Rasit Yetimova – click here .