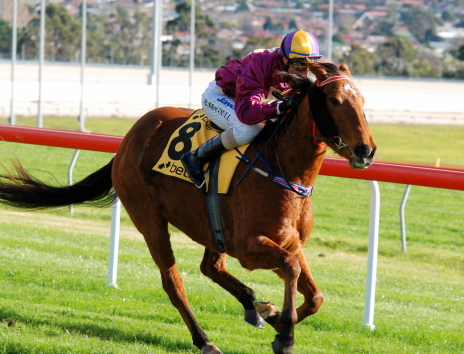 LAST preparation Date And Sign failed to win from six starts but five placings suggested she was not far off breaking her maiden status.

At Tattersall’s Park in Hobart today the well bred four-year-old mare delivered on that promise with an effortless win in the Mount Lord Orchards Maiden Plate.

With premier jockey Brendon McCoull aboard the mare began well from her wide gate that was the preferred barrier on the slow-rated track.

Once in front McCoull settled her on the rails and turning for home she burst clear and gave nothing else a chance as she powered home to score easily from Sting’em and Loft.

Trainer Stephen Lockhart predicted last preparation that she would develop into a handy sprinter-miler and believed the winter racing would give her more scope and that’s exactly how it played out today.

Date And Sign (Ladoni-West With Pride) is owned and raced by prominent owner John Farrell in partnership with Paul Jones.

Farrell was delighted with the win.

“The mare ran into a couple of smart ones last time in so she deserved to win one,” Farrell said.

Listen to what trainer Stephen Lockhart had to say about Date And Sign’s maiden win – click here .