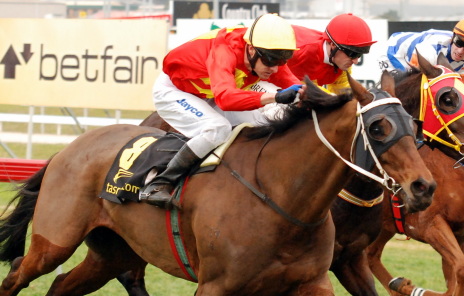 Both were ridden by Kelvin Sanderson with Nerak’s win the most pleasing for both trainer and rider.

“He probably should be unbeaten this time in,” Davis said.

“He’s a nice horse with a bit of toe (speed) and I think he’ll also get over a bit of ground,” he said.

The gelded son of Savoire Vivre-Marrow Match was originally trained by Charlie Goggin for who he had three unplaced runs last season.

When Goggin opted to cur back his training operation Nerak was one of the many that needed to be relocated.

The gelding’s owner-breeder Brendan Keep sent the horse to Davis and he set about preparing the four-year-old for a solid campaign.

“He’s not an easy horse to train because he is a poor doer (eater) and we’ve really had to take our time with him,” Davis said.

Nerak was bred by Keep and is raced by him in partnership with Kristy Wisniewski.

Keep raced Nerak’s dam Marrow Match that was prepared at Spreyton by Barry Campbell and won the 1997 Tasmanian Oaks and she also crossed Bass Strait to win a race at Caulfield.

Tawera was given the run of the race by Sanderson who had the six-year-old settled just off the pace and when they straightened the gap came in the straight and he burst clear close to home to score by 1-1/2 lengths from Mr McCartney with the luckless Toughtee a length astern.

Davis is one of a rare breed who dabbles in thoroughbreds and harness racing.

He is a talented reinsman and harness trainer and he gets the chance to snare a unique double if he can guide smart pacers Modern Ruler and Commander Data to victory in their respective races at the Devonport Showground tonight (Monday).