Davpass makes most of drop-back rule 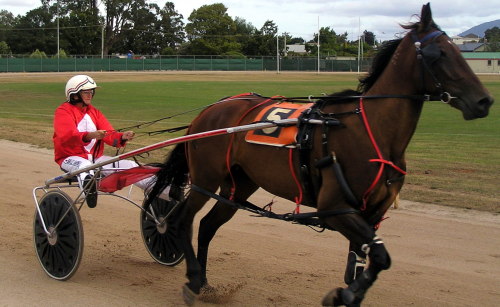 HOBBY harness owner-trainer Gary Freeman heaved a sigh of relief when his mare Davpass scored an overdue win at The TOTE Racing Centre in Launceston on Sunday night.

Davpass had had to settle fore luckless minor placings in recent weeks but courtesy of a confident drive from classy reinswoman Shelley Barnes the mare finally broke the drought.

Barnes settled the six-year-old in the one-out-one-back position and she travelled well but Barnes was forced to ease the mare out three-wide 650 metres from home to avoid being pocketed.

Davpass improved steadily leading the three-wide line and hit the front at the top of the straight.

When Barnes called on the mare fore the supreme effort 200m out she knuckled down to her task and went on to score an effortless seven-metre win over Strategic Miss with Mollie Fin 1-1/2 metres astern.

Freeman was delighted with the win but said he was unsure whether her respiratory problem would flare up during the race.

He also expressed his pleasure at the recently introduced drop-back rule which allows any horse ranked C2 or better to drop back a class with every 10 consecutive non-winning runs.

Listen to what Freeman had to say about the win – click here .