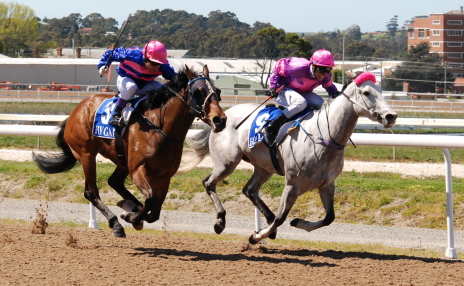 Gear up for a smart punt on the synthetic this Saturday with our pre race digital products.

Racing continues on the synthetic track at Tapeta Park this weekend and for the second time this season we’re racing on Saturday.

The feature event will be the final of Tasracing’s Winter Sprint Series, with the race worth $25,000.

The favorite is sure to be Innocent Gamble on the back of a dominant win in the prelude of the series a fortnight ago. However, expect Loaded Owners who drops 7kg on his last start easy win here to be prominent.

Gotta Have Faith, which rattled home at this venue last week, could add some value to the exotic bets.

There are also a number of highlights to be observed amongst the jockeys ranks:

• The main highlight will be the appearance of Jamie Bayliss (father of Jake and Regan) who recently returned to race riding after a 20 year absence. Jamie has ridden approximately 250 winners in his career including an Ipswich Cup in 1989. See Jamie and Jake go head to head in a number of races.
• Last years premier jockey Brendon McCoull rides for the first time this season.
• Shannon Brazil returns from Victoria to ride in Tasmania for the first time since early April.

There are nine races on the card and it promises to be a great day of Tassie racing.

The first race is scheduled to jump at 12.17pm.