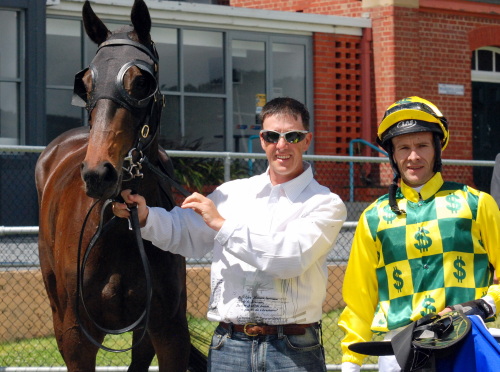 Danny Dazzler produced an eye-catching fourth at his second race start in Hobart on December 1 and trainer Stephen Lockhart was quietly confident he would break his maiden status.

“This horse has a very bright future and I think the longer the journey the better he’ll perform,” Lockhart said.

Danny Dazzler is owned by Dudley Clarke who has established a state-of-the-art training complex at Brighton and Lockhart is his personal trainer.

“That’s my first winner for Mr Clarke so it’s nice to break the duck, especially with a good horse,” Lockhart said.

Danny Dazzler was ridden by Kelvin Sanderson who gave the gelded son of Denon the run of the race trailing the leaders.

It was an emotional Sanderson who said the win was dedicated to his late father-in-law John Davis who passed away last Sunday.

“John was one of my greatest supporters and he is going to be missed a lot,” Sanderson said.

It was the first of three winners for Sanderson who also saluted aboard Prefer A Kiss and Weaver Boy.

Listen to what jockey Kelvin Sanderson had to say about Danny Dazzler’s win – click here .