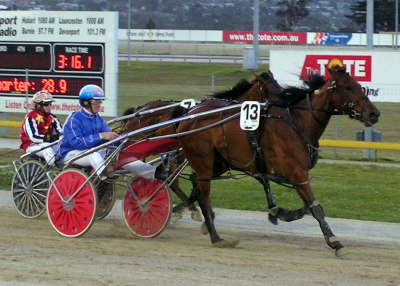 STAR Tasmanian-owned and bred mare Deanna Troy died this week as a result of a heart attack.

The reigning Australian mare of the year suffered a ruptured aorta nearing the completion of a track workout at her trainer Graeme Lang’s stables in Victoria on Tuesday.

Her regular driver and co-trainer Gavin Lang said the mare’s death is a “tragedy”.

“This has come as a real shock,” Lang said.

“She was working over the final 200 metres of her workout when she got the staggers and next thing she’d dead on the track.”

“There was an autopsy performed and it confirmed she had suffered a burst aorta.”

“It and it is especially sad as this was to be her last preparation before embarking on a carer as a broodmare. She was to be pregnancy tested today to confirm that she was in foal to Somebeachsomewhere (US stallion).”

“She had been with us since she was a three-year-old and that she was such a kind horse and a pleasure to have in the stable, her loss was even more devastating to the family but not as devastating as it is for her owner,” Lang said.

Deanna Troy’s owner Steve Heathcote was so upset he was unable to control his emotions.

The mare had taken him on a ride that every racehorse owner dreams of and he treated her more like a member of his family that an equine investment.

Deanna Troy began her racing career in Tasmania and dominated as a two-year-old and early three-year-old I the care of Tasmanian trainer Ross Freeman.

When she was identified as a potential star she was transferred to the Lang stable in Victoria where she developed into arguably the best mare in Australia.

A panel of judges voted Deanna Troy Australia’s best race mare for the 2008-2009 season, after which Heathcote confirmed this would be her last season before going to stud.

Deanna Troy’s career statistics are testament to her ability.

Last season was clearly her best winning the $20,000 Blossom Lady in Melbourne, the $100,000 Ladyship Mile in Sydney before venturing to her home state to win the $50,000 City of Launceston Cup against all the top male free-for-allers and capped her season with a victory ion the $50,000 George Johnson in Hobart.

Deanna Troy won multiple races every preparation and will be remembered as one of the greatest Tasmanian mares of all time.