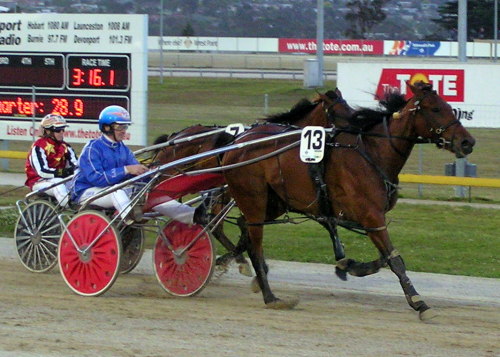 CHAMPION Tasmanian mare Deanna Troy broke a 10-month drought when she scored a game win in the Golden Wattle Cup over 1720m at Melton’s TabcorpPark on Friday night.

It was her first win since blitzing her rivals in the $509,000 George Johnson in Hobart last December.

She started on the second row but Lang quickly turned that negative into a positive by weaving her through the field early to take the lead and dictate the pace.

After a pedestrian first half (800m) of 1m.01s and a third quarter in 29.2, she had plenty in the tank to scoot home her last 4000 metres in 27.7 secs and stave off the fast-finishing Bay Torrent by a neck with Miss Laura Jane a distant third.

Deanna Troy, voted Australian mare of the year for last season, had been struggling to recapture her best form but under the guidance of her co-trainers Gavin and Graeme Lang, she eventually raced her way out of a form slump.

“That’s the confirmation we needed that she still wants to be at the races,” Gavin Lang said.

“The George Johnson is on in December again and being from Tasmania that will be her main target now.”

“If she comes in season in the near future then we’ll possibly put her in foal and race her for a couple of months, but she’ll be right to go to Tasmania again,” Lang said.

Deanna Troy will probably start one of the favourites, irrespective of what else crosses Bass Strait for the prestigious mares’ event that is one of the features during a two-week carnival in Tasmania from December 13-27.

Jane Ellen was a champion Tasmanian-bred and owned mare that was trained by the late Vin Knight and together they scored some amazing wins at Group level.