Decembrist – All class in Distance Stakes 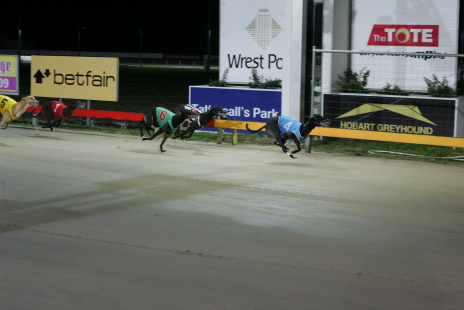 Decembrist added another feature race to his CV last night when he comprehensively won the Black Buffalo Hotel Distance Stakes.

Trained by Peter Phillips from Copping this son of Big Daddy Cool has taken his career tally to 28 wins and 40 placings from his 94 starts and like a fine wine is getting better with age.

Jumping from box 4 he settled well in a pretty clearly run race, Custodian for Steve O’Brien led at the first split (5.24), while Pippi’s Gold (12.47) was a shade in front at the second.

Once in the straight Decembrist moved past Custodian who hung on gamely for third while top bitch Bell Haven got some clean air to grab second two lengths behind the winner.

Phillips will now have to decide which way he would like to go as the Nationals approach in late August, as this super dog could contest both the sprint and distance and hold his own in either.

Simply Wunder appears like a greyhound to follow in the coming months with another victory last night for veteran Bracknell trainer Maurie Strickland.

Only lightly raced this Where’s Pedro pup has now won 7 and been placed 6 in 22 starts.

The Heats of the Silver Trophy were won by Shanlyn Hirdy ($12) and New Recruit ($1.80) respectively.

Huonville and North Hobart Football Clubs were guests of the Club last night and from all reports enjoyed a great night of entertainment.