Decembrist makes it a hat trick 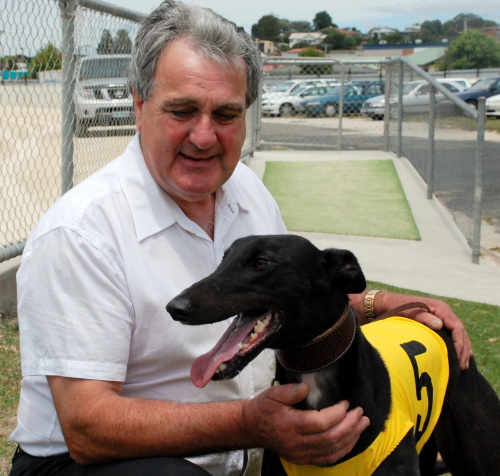 PROMISING pup Decembrist made it a hat trick of wins when he powered his way to victory in a strong juvenile event over 452 metres at Devonport today.

The Peter Phillips-trained dog began well from box five and after a short stoush with Lady In Charge (4), he found the rail and was not troubled to score by seven lengths from Highest Regard with reserve Kate Johannah three lengths astern, just in advance of Lady In Charge.

Phillips said the dog had a bright future.

“We have always had faith in him because he was quite exceptional when he was broken in but he had a few little hiccups along the way before he raced,” Phillips said.

“He has really come on in recent times and today’s run showed his strength,” he said.

Decembrist stopped the clock at 25.76 which was very smart given he faced a strong headwind in the home straight.

“This dog is only small but he’s as strong as an ox and that’s one of his greatest assets,” Phillips said.

Decembrist has won his past three impressively but Phillips is content not to look at any big targets in the immediate future.

“We are hoping that he’s going well enough and in form for the Launceston Breeder’s Classic in March but other than that we are just content to let him race through his grades,” he said.

The Devonport Cup is definitely off the agenda.

“His time today would suggest he would be competitive in the Devonport Cup series but he’s just not experienced enough to tackle that type of series but maybe next year,” he said.