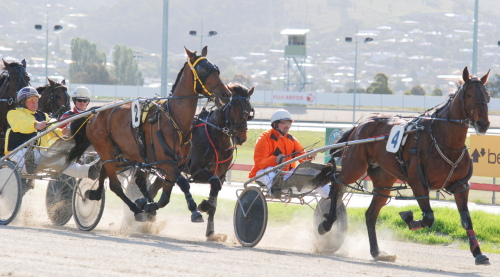 HOBBY harness racing trainer-driver Mark Geeves broke a long drought when his four-year-old Delta Sands scored an all-the-way win in a C0 over 2090 metres at Tattersall’s Park in Hobart on Sunday night.

Delta Sands was having only his second start and while his time was pedestrian there was a lot of upside to the way he went about breaking his maiden status.

Geeves hadn’t been in the winner’s circle since Bohemian Prince scored at bolter’s odds in the Alby Bennett Memorial at New Norfolk on Anzac Day (April 25) 2008.

“It’s been a log time between drinks but better late than never,” Geeves quipped as he unhitched the four-year-old.

Delta Sands was bred in NSW and offered for sale as an early three-year-old on the internet.

Geeves was pleasantly surprised when the horse landed in Tasmania and he is hopeful the son of River Khan-Fayes Dream can win more races this preparation.

“He’s got good gate speed and he was able to use that tonight to his advantage,” the trainer-driver said.

“They came at him strong over the last 200m and he was headed but he fought back and that’s a good sign in a horse,” he said.

Delta Sands started as one of the outsiders at $41 in the field of 12 but Geeves said he had a small wager.

“His first start was pretty much a learning curve because he had to face the breeze and he just knocked up over the last bit but his track work had been encouraging and I thought if he was able to lead he might be hard to run down and that’s how it panned out,” Geeves said.

Listen to what trainer-driver Mark Geeves said about the win of Delta Sands – click here.