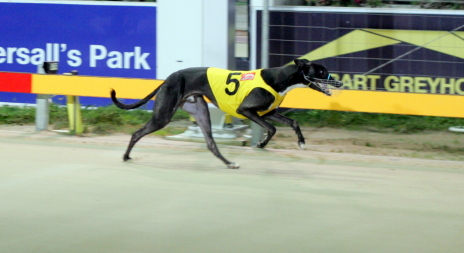 PROMISING young dog Denersur has made an immediate impact since arriving from Victoria last month.

The Mick Stringer-trained pup won two races at The Meadows in March-April and followed up with a string of minor placings before being shipped to Tassie.

Denersur finished third at his Tasmanian debut in a grade five event in Hobart before winning at his subsequent outing at the same venue.

Last Thursday night he won again, this time in a strong grade four over 461 metres and he did enough to suggest he has a very bright future.

The son of Black Enforcer began only fairly from box five and was engaged un a bumping dual several times on the way to the top turn but he overcame the interference to- shoulder his way t the front and once on the lure he sped clear and went onto win comfortably.

He ht the line almost five lengths clear of Awesome Pedro with Hellyeah Xena about two lengths away third.

Denersur’s mother was unplaced from only two starts but she was by Bobniak from the Head Honcho broodbitch Lovely Portrait that won five from 11 of which her first two wins were at Sandown.