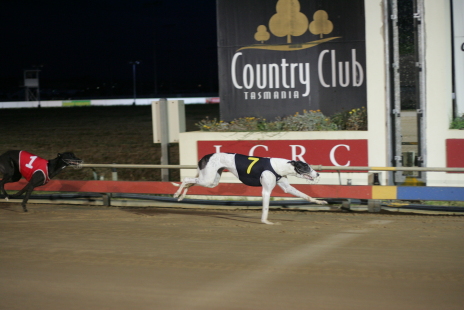 Penguin trainer Butch Deverell will be hoping for a hat trick of winners at Elwick tonight.

All from the litter Headbound – It’s A She, siblings Beaudine (R3), Miss Hetti (R4) and Jethro (R9) look well drawn and should all be very hard to beat.

Beaudine has drawn perfectly off the red and has won his last three in emphatic style, definitely the class runner.

Bearville Phil has been working nicely and looks the quinella option.

Miss Hetti jumps from the check over the 599m and if anywhere close early will be running home strongly.

Posh Will looks her main opposition while Whitney’s World may run a race at odds.

Jethro like his brother also has the coveted cherry and his prepost quote of $1.50 speaks highly of the form he is in. He has won five of his last nine in smart company and drops a lot in grade here.

Silent Giggle will be his hardest opponent while Hellyeah Rocket could make up the multiples. November Digger and Mojito look like running the quinella in the Invitation (R6) while another Deverell runner Bosco (R7) looks an each way special.