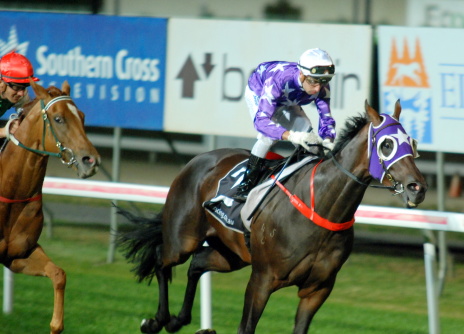 Spreyton trainer Barry Campbell has his sights on the Devonport Cup with well-bred four-year-old Conquestador.

“He’s probably going to have to win the Sheffield Cup or Golden Mile or he won’t get in,” Campbell said after Conquestador beat higher class rivals in the Benchmark 78 Handicap at Spreyton on Sunday.

“Win either of those races (which offer exemption from the Devonport Cup ballot) and he gets a free ride in.

Conquestador is a full brother to Campbell’s former top mare Reunification and, according to the trainer, shares her dislike of wet tracks.

“None of the family has been able to go in the wet,” he said.

“But, I don’t think this horse is at his best here (on the synthetic surface) either.

“He doesn’t let down properly on this track.

“Put him on a good 3 track at Mowbray or Elwick and he’ll be a real good horse.”

– Courtesy of The Examiner