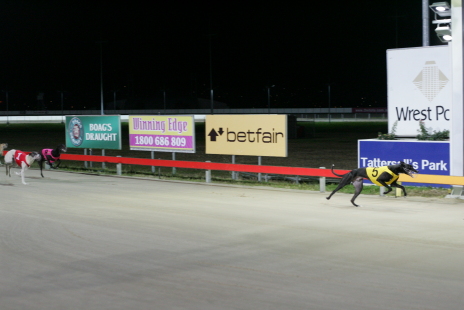 Veteran Mowbray trainer was thinking of retiring then along came a son of El Galo, named El Rojo Tini (R4).

This black dog was named as a reserve in a very strong Juvenile last week but gained a start.

Jumping in front and recording faster earlier sectionals than Rewind and Emerald Lee he was overtaken in the straight and eventually finished 3rd beaten 2 ½ lengths in 25.74.

He then won a 340m race at Hobart on Thursday Night in fast time.

Today he jumps from box 4 and should be in front again for a long way.

Jaguar Pines looks the hardest to beat while Pretty Fantasy is one for the multiples.

The program opens with two middle distance races and both look match races, Tadmore Dunoon and Irinka Julia should fight out the first while Miss Hetti and Custodian look the best in second.